Computer-based voice recognition for radiology reporting has become extremely accurate and due to the substantial cost savings compared with transcription services, is the preferred method of report dictation for many radiologists.

The following voice recognition packages are recommended for use with OnePacs.

OnePacs offers its own voice recognition solution (OPVR Cloud), which is tightly integrated into the OnePacs reporting system.  OPVR is built into the Cloud Report Editor and does not require installation or training.  Documentation can be found here.

While OnePacs allows the use of 3rd party voice recognition products, the best level of integration remains OPVR Cloud.  Features such as saving of audio files, certain voice command, and others may not be supported when using a 3rd party product.

Dragon medical one from Nuance is a cloud-based voice recognition solution provided by Nuance. It may be used stand-alone together with OnePacs, though maximal compatibility is ensured by using the OnePacs third party VR integration feature. When using Dragon with OnePacs without the OnePacs third party integration feature active, Nuance's browser extension for Dragon compatibility should be installed. The "General Medicine" topic is suitable for use with radiology reporting.

If third party VR products are used without the direct integration feature, compatibility may be aided by having OnePacs voice recognition set to ON, but with the microphone state set to "stopped".

To do so, first access reporting preferences either from the general “User Preferences” item in the “Options” menu on the main OnePacs worklist page, or by clicking on the gear icon in the upper right hand corner of the OnePacs report window.

The option to be selected appears as follows:

If you are editing in rich text mode, a text formatting toolbar will be present:

If the computer on which dictation is being performed is also the PC which is being used for case review, one may use the hidden mode feature of Dragon Medical Practice Edition to enable simultaneous dictation while reviewing cases. To use this feature, say the words “hidden mode on” when you wish to enter hidden mode. Your dictation from that point onwards will be recognized by Dragon, but rather than “typed” immediately, it will be stored for later use. After you have finished case review, place the cursor in the location where you wish the recognized text to be pasted, and say the words “transfer text”. The results of your dictation during the time hidden mode was on will be pasted at the cursor location.

A video demonstrating use of this feature is available here.

Any standard voice-recognition grade microphone will work with either of the above described dictation methods in OnePacs.

For users using the Dragon Medical Professional package, Nuance offers a microphone with user-programmable buttons, which can control dictation functions from the handset. This device is called the PowerMic and is described here:

A variety of other microphones are available from a number of on-line vendors, including:

One vendor offers an online guide to microphone selection:
http://speechrecsolutions.com/microphone_selection_guide.htm

A popular option for users who prefer hands-free dictation is the Buddy Flamingo stand-alone microphone:
http://speechrecsolutions.com/microphones_buddy.html

The OnePacs cloud reporting system contains a facility for saving audio files, without voice recognition, which are attached to the case and can be listened to by transcriptionists for the purpose of transcribing cases. This can be used in conjunction with the proofreading workflow.

In order to use this feature, enable OnePacs Voice Recognition in user settings, and enable the "Store audio files" feature. To suppress recognition of text by OPVR, you may additionally select the "Only store audio" option. The microphone should be set to an enabled state such as "Command mode only":

When this is done, and the report is completed or a draft is saved, an audio file will be available through the "study files" feature, which can be played in-browser:

It is also possible to toggle the audio storage options on the fly while dictating cases, rather than setting them as a default preference: 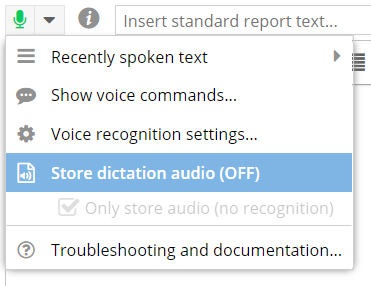 Audio files are retained for a period of 60 days, after which they will be automatically deleted. The audio files are intended to be used for transcription into a written report and accordingly are not retained indefinitely. Users can download the audio for any particular study if they wish to retain the audio for that study.

The audio files are available to users who have view access for the case in question, and who additionally meet one of the following criteria: the case is assigned to them, they produced the audio file themselves, or their user type is Administrator, Transcriptionist, or Radiology Assistant.

OnePacs users are advised to cease use of this deprecated method, and instead use the store audio feature of OnePacs Voice Recognition, described in the previous section of this document.

The Dictation feature of OnePacs allows users with browsers that support Java applets to dictate directly into a OnePacs reporting window. When this is done, the voice recording files (.wav files) will be directly attached to the cases for which dictations were performed.

Users for whom the “Dictate” privilege has been assigned in OnePacs will have a “Dictate report…” option available in the menu displayed upon right-clicking on the case being reported: 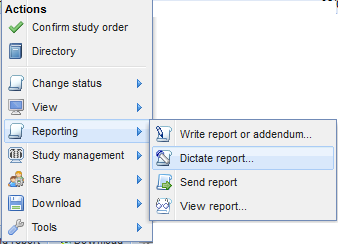 This will bring up a new window, running a voice recording Java applet, set to record audio in from the currently selected default audio input device. This is compatible with Windows and Mac OS X. (This likely also works properly in a Linux environment.) 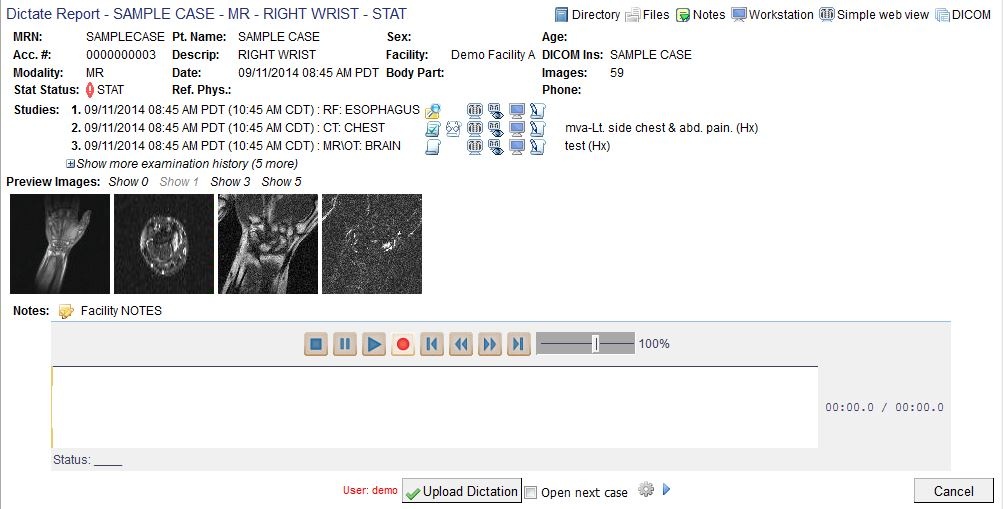 The on-screen controls for starting and stopping recording, playback, and pausing recording or playback are self-explanatory. The Java applet also attempts to recognize any installed speech-input devices and may recognize the on-device controls for these functions as well.

When dictation is completed, stop dictation and click the “Upload Dictation” button. The voice recording, as a .wav file, will be uploaded to OnePacs and the file will be attached to the case. The case will acquire the worklist status of “Dictated”, with the following status icon:

.  The case will be automatically be reassigned back to the radiologist that performed that last dictation.

The following system permissions will enable those users who also have “view” access to the facility which performed the study to access study dictations: “Access or upload study files”, “Dictate” or “Transcribe”.

among the toolbar icons for the case in question:

Upon clicking on the “listen to dictation” icon, the dictation file will download to the logged in user's local PC, from which point it can be played in the default program configured for playback of audio files.

Alternatively, the voice dictation file may also be retrieved from the study files folder for the case in question.

Users with the “transcribe reports” permission one OnePacs may enter transcribed report texts for cases, and save these reports as report drafts on OnePacs. Upon so doing, the case acquires a worklist status of “Transcribed”, with the following worklist status icon:

The reading radiologist can then open the report draft, review the transcription, edit as necessary, and finalize the report.