Web Browser: A modern browser such as Chrome, Edge or FireFox running on Windows or mac OS.

Permissions:  The "OnePacs Voice Recognition" permission is required to use voice recognition.

Language:  Only the English language is presently supported.

OnePacs Cloud Voice Recognition is a purely web-based, cross-platform speech recognition product built into the OnePacs reporting solution.  No applications or browser plugins/extensions are required and the engine is speaker-independent so no voice training is required.  This allows physicians to quickly and accurately dictate medical imaging reports with minimal setup.

When using OPVR for the first time, or when switching to a new computer or new microphone, or as a troubleshooting measure in the case of recognition issues, it may be useful to calibrate your microphone volume.

Instructions on how to do this on Windows systems is given here:  https://support.microsoft.com/en-us/help/4027981/windows-10-how-to-set-up-and-test-microphones
On macOS systems, select the "Sound" panel from System Preferences, then select the Input tab. Click the name of the microphone in use, then slide the "input volume" slider to the left or right to adjust sensitivity. Depending on your audio environment, it may be helpful to check "Use ambient noise reduction" to reduce background noise which may interfere with recognition.

The status of OnePacs Cloud Voice Recognition is indicated by the microphone icon with the OnePacs reporting solution.

When the OnePacs Report Generator/Editor browser window is activated, the microphone will automatically activate if it was previously active.  This allows for switching between windows without having to start/stop dictation.  Only one reporting window may be active at a time.

OnePacs Cloud Voice Recognition may be used when the browser is in the background.  This allows a radiologist, for example, to interact with an image viewer application while continuing to dictate.  Voice commands may be issued when in the background.

Keyboard shortcuts typed while viewing cases can be transmitted in the background to the report edit window, making it possible to use such shortcuts while the Workstation is active and the report edit window is backgrounded. This feature is available with OnePacs Desktop for Windows version 13.0 or later, or OnePacs Desktop for macOS version 2.5 or later.

Certain features within the OnePacs report editing interface are invokable via voice commands and keyboard shortcuts.  See the in-app documentation for a list of commands.  You can also dictate "show voice commands" with the microphone active.  Some voice commands are configurable in the Voice Recognition tab of the User Preferences.

When using OnePacs Voice Recognition, audio files of the dictation are automatically saved when the report is saved so that an authorized transcriptionist/proofreader may later review the audio if necessary.

Dictation audio files are available for playback in the following sections of the OnePacs application:

Audio files are persisted for 60 days and are available to authorized users until that time.

The following are the currently available versions. 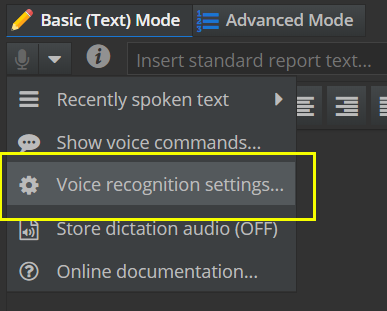